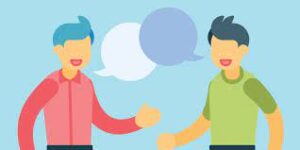 I got a win the other day. I started last week’s post with an epic fail so I decided to start this week off with a win. Also, it’s newsworthy for me to get a win on this topic because I struggle with this one as much as I do with last week’s. After a meeting, an older gentleman came up and began to tell me his life story. It was very interesting. He had wanted to design and built boats but wound up in law enforcement for 35 years. After that, he ran a homeless shelter for 15 years during which time he went to seminary and became an ordained minister. He currently serves as an associate pastor and often sings on the worship team.

Where’s the win? The win is that I got to hear his story because I kept mine out of the conversation. Most people love to talk about themselves. I have a friend who likes to joke, “Enough about me, let’s talk about you. What do you think about me?” That line is funny because it’s true. We want to talk about ourselves. I started this post with a story about me. Yikes! I didn’t even think about that correlation until now.

Other people’s stories enrich us. In her TED Talk on how to have a good conversation, NPR radio host, Celeste Headlee says, “Be interested in other people. I grew up assuming everyone has some hidden amazing thing about them. I’m a better host because I keep my mouth shut as often as possible, I keep my mind open, and I’m constantly prepared to be amazed. And I’m never disappointed.”

We have two ears and one mouth. When we interact with people, we should listen at least twice as much as we talk. I’m as guilty as the next person of jumping into someone else’s story to share part of mine. Our minds process what we hear by searching our memory files for similar information or experiences to help us understand and relate. When we find such an experience our tendency, or at least my tendency, is to share it. My intention is to relate with the other person. But, it doesn’t come across that way usually. Usually, it derails the other person. The story isn’t about me, it’s about them and when I jump in with my story it’s more of an interruption than an aid to the conversation.

We relate better by listening than by talking. Listening says, “I’m interested in you.” Talking says, “you should be interested in me.” Next time you’re in a conversation, try holding back, resisting the urge to share your story, and see how it goes. You might get a win like I did.

I’m not suggesting we don’t speak at all during a conversation. In fact, someone has described a good conversation as being like a game of catch. It goes back and forth. The purpose of the conversation will determine how much back and forth is best. Right now I’m talking about a specific kind of conversation, one where you want to hear the details of what the other person is saying. It may be an interview or an investigation. It could be a get-to-know-you conversation of any kind or it may simply be an honorable way to ask, “how was your weekend?”

I wrote a post almost exactly a year ago called “Listen with your mouth.” The most effective use of our mouth in this kind of conversation is to ask questions. Good questions show you’re interested in what the other person is saying. They also help you guide the conversation into what interests you most or what you most need to know. In the conversation I started this post with, I asked that gentleman a couple of probing questions about what he learned from his work with homeless families. It was very enlightening. He eagerly offered his observations and it was information I was interested in. It was also a conscious choice I made when the urge to interject my story came up.

I was recently asked to be part of a mediation conversation between an employee and a manager. On several occasions during that conversation, I asked one or the other, “A moment ago you said … this. Would you explain a little more for me what you meant by that?” Those questions helped guide the conversation to a favorable resolution.

I’m interested in people. I like to hear their stories. When someone is sharing their story with me I’m going to remember whose story it is and be proportional and inquisitive rather than constantly interjecting my story.

One Reply to “Whose Story Is It?”