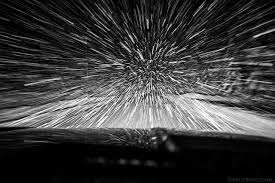 Several years ago my wife and I loaded into our mini-van with some other members of her family and drove from where we lived at the time in Normal, IL (it’s a real place!) to Lincoln, Nebraska because our local college basketball team was playing in the first round of the NCAA tournament. We had a great time on the drive over and then watching a couple games.

When we started home later the same night a blizzard hit. We drove most of the way home in white-out conditions. That’s what you call white-knuckle driving. We had to be home for some reason by a certain time the next day so we kept going. In those conditions you can see better with just the parking lights on because they don’t reflect so much light back at you off the blowing snow. Your best friends are the lines on the road, if you can see them. That solid white line on the right tells you where the edge of the road is and the dashed line on the left let’s you know you’re in your lane. When you can’t find the boundary lines, your stress level really goes up.

A Little Off Topic

Last night my wife and I went to Costco for gas and then pulled into the parking lot. I was going to run in for a couple things and get the hot-dog-and-a-coke-for-$1.50 deal for our dinner on the way out. Right after we parked we heard someone screaming. It was a high pitched scream like a child so we quickly looked around worried that some child may be hurt. Then we saw what was happening. A toddler apparently didn’t want to get out of the shopping cart and into the car. He was screaming at and hitting his mom with nearby grandma looking on trying to calm him down.

My wife, who is something of an expert on raising children, was horrified. She’s the one who made the connection between driving when you can’t see the boundary lines and the stress children feel when the boundary lines of behavior aren’t clear. There is security in knowing where the lines are. Under normal conditions the lines aren’t restrictive, they’re safe. “Can you imagine,” she said, “what would happen if everyone just drove wherever they wanted?!” When conditions turn stressful, the lines are a blessing!

To take the analogy a little further, you can’t paint the lines during the snowstorm. They have to be put in place when the weather is good. Teaching children where the boundaries are when everyone is calm and happy is the way to prevent outbursts like what we saw last night. Early, consistent, loving reinforcement is the key. When one of our five children was tired or cranky and tested the boundaries (and they did!), one quick look from Mom was usually all it took to remind them where the lines were. They felt secure in knowing that.

The same is true in work relationships between employers and employees. Whether the boundaries are about attendance, workplace behavior, or safety, for example, establish them early and reinforce them consistently. We’re happier and more productive when we feel secure in knowing what’s expected of us.

When we were white-knuckling it back home from Nebraska in that blizzard, you could feel the tension ease when we could see the lines on the road. Then we only had to worry about tail lights suddenly appearing in front of us. But, at least we knew we were safely on the road.