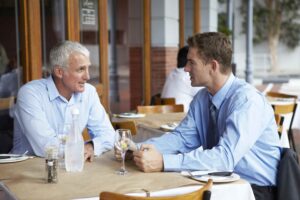 Christian apologist and well-known author of The Chronicles of Narnia, C.S. Lewis, said, “Integrity is doing the right thing when no one is watching.” One thing about restaurants that I find fascinating is that each table is a separate little world where the inhabitants seem to believe that no one is watching them even though they are in full view of everyone else in the room. Ironically, that makes for some interesting people watching.

Once in a while, when Suzi and I are out alone, we’ll imagine the story behind a certain scene at a table. We’re not creepers but every once in a while a particular scene will be so obvious that we can’t help but be curious about “what’s going on over there?” That reminds me of a story I recently read. I thought it was interesting and had a great life lesson along these lines.

I’m reading a book by Richard Stearns, former CEO of Parker Brothers, Lenox, and World Vision, called Lead Like it Matters to God: Values-driven leadership in a success-driven world. In a chapter about integrity he relates the following story:

Early in my career, I was put to the test on this principle of private versus public behavior in one of my first job interviews. I was twenty-five years old at the time and had a full day of interviews set up for that entry-level marketing position at Parker Brothers Games. I was impressed that even for an entry-level job they had arranged for me to meet with several vice presidents, three marketing directors, and even a “drive-by” with the president. I really wanted this job, so I did my best to make a positive impression. Then at lunch, I was kind of surprised that they sent me out for almost two hours with a much lower-level employee named Clint, who worked as a marketing research analyst. I doubted that his input would matter much compared to the directors and vice presidents. but off we went to a local eatery.

As I recall, Clint and I had a good time eating fried clams somewhere in Salem, Massachusetts, and talking about what it was really like to work at Parker Brothers. A few days later I was thrilled to get the call that they were offering me the job. When I showed up for my first day of work a couple of weeks later,  I spent the morning with my new boss getting briefed. But his opening comments are the ones I remember to this day. He  looked at me and said: “You know why we hired you, don’t you?” Of course, I’m thinking it must have been my scintillating interview technique, my winning personality, my prematurely graying hair, my impressive Wharton MBA,  or maybe my solid twenty months of previous work experience. But no, he said, “You passed the ‘Clint test.’ We knew you would be on your best behavior with the directors and the VPs, but we wanted to see if you were a jerk when your guard was down, so we sent you out to lunch with Clint. You passed. Clint told us he thought you were a good guy, so we hired you.” Wow! And I thought no one was looking.

When No One Is Watching

Just like the people Suzi and I watch in restaurants, Richard didn’t know anyone was “looking” during his “final interview.” The real lesson for me is when I flip that around and ask myself who’s looking at me or at us? What story might they weave based on their observation of my behavior?

I’m a person of faith so I believe there is always someone watching. That both comforts me and keeps me on my toes. Whether or not you believe someone is always watching over you, C.S. Lewis’ quote about integrity is true. Character in general and Integrity, in particular, is what makes people, families, and nations strong from the inside. We seem to be experiencing a shortage of that these days.

Will you join me in self-reflection on the question, “Is there integrity between what’s on the inside of me and how I behave outwardly?” Am I a person of character and does it show? Because you never know who’s watching.

One Reply to “When No One Is Watching”