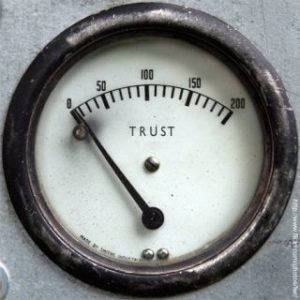 During the time leading up to the signing of the INF Treaty in December of 1987, President Ronald Reagan learned a Russian proverb, Doveryai, no proveryai meaning, “Trust but Verify.” He learned it because he knew the Russians liked referring to proverbs and he said it at every nuclear disarmament meeting with the Soviet leader. When he said it again on December 8, 1987 at the signing ceremony, Gorbachev said, “You repeat that at every meeting.” Reagan answered, “I like it.” Mr. Gorbachev had a quote of his own. He quoted Ralph Waldo Emerson, who had been popular in the USSR when Gorbachev was in college, saying “The reward of a thing well done is to have done it.”

Which is it? Trust or Verify?

You can’t do both. Think about the definitions of each word and you’ll see they are mutually exclusive. “Trust” means “to believe in the reliability, truth, ability, or strength of someone or something.” On the other hand, “Verify” means “to prove or ascertain the truth or correctness of, as by examination, research, or comparison.” When you trust someone you act on your faith in their reliability, truthfulness, ability or strength. When you verify, your action is to check on the reliability, truthfulness, ability or strength of that person. Trust builds relationships, verification assures outcomes. That’s the heart of the matter. Verifying can be interpreted as “Micro-managing” and can destroy trust.

There are some times and some industries where the outcomes are too critical not to verify. Some of those industries include Healthcare, Aviation, Utilities, etc. You can see how verification in these industries would be essential. In settings where verification is just part of the work, it doesn’t have a negative effect on relationships. On the other hand, most of us don’t work in those types of industries.

What Difference Does Trust Make?

“If every business learned to create a profound sense of trust through everything they do, not only would their bottom line improve but it would create a culture that attracts great talent and opportunities. Consciously creating trust is good for business, good for people and good for the world.” Masami Sato, Founder, B1G1

That quote comes from an online endorsement for a book titled Trust is the New Currency, by Sheila Holt and Fredrick Sandvall. According to the title of Stepen M.R. Covey’s book trust matters, The Speed of Trust: The One Thing That Changes Everything. Then there’s Nan Russell’s book, Trust, Inc. How to Create a Business Culture that will Ignite Passion, Engagement, and Innovation.

One of John Maxwell’s 21 Irrefutable Laws of Leadership is “The Law of Solid Ground.” It says that leadership is built on the foundation of trust. In fact, he says, trust is necessary in all good relationships.

Trust is very important. We trust airlines and surgeons because they verify. We trust our bosses because they trust us. One of the ways trust is built is by giving it. When you are the boss and the outcomes are not life threatening, try giving trust to your people.  You will find they usually become even more trustworthy.