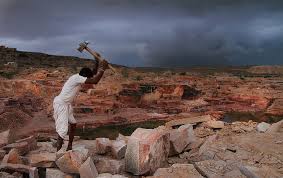 I’m sure you’ve heard the story. It was way back in the days when building stones were cut by hand. One day a manager wanted to see how stone cutting operations were going so he went out into the quarry to observe. As he watched, he noticed three different stone cutters. They were all working but they were working differently. One was steady and methodical. He looked like he would reach his quota, but not a bit more. He took a few shortcuts the manager didn’t like but they didn’t effect the overall quality of his work which was passable.

The manager saw another who seemed equally methodical only he didn’t cut corners. This stone cutter looked like he would meet his quota as well so he was working a little harder than the first. He checked his work to be sure it met quality standards so it was at least as good as the first stone cutter’s work.

Then there was the third. This one was different. He whistled while he worked. He didn’t seem to be working any harder than the others but he was already almost at his quota. As the manager watched longer, he noticed that this stone cutter had found a way to improve his output by the way he arranged the stones he was cutting. And his quality was superior to the others.

The manager was curious. What made the difference in the way each of these stone cutters worked? So he decided to ask each one of them the same simple question, “What are you doing?”

He approached the first stone cutter and asked him, “What are you doing?” The guy looked at him like he was crazy and said, “What does it look like I’m doing? I’m cutting rocks.”

He approached the second stone cutter and asked him the same question. This one simply replied, “I’m earning a living for my family.”

Finally, he came to the third stone cutter. The manager was curious to see how this one would answer the question, so he asked, “What are you doing?” The stone cutter looked up with a beaming smile and said, “I’m building a cathedral!”

All jobs have mundane tasks that we don’t necessarily enjoy but we have to do because it’s part of the job. Most organizations have jobs that may seem mundane, like cutting rocks, but are necessary to the success of the organization, like building cathedrals.

The ability to link the most mundane seeming tasks to the overall objective of the organization is key to seeing the best results. Some people, like the third stone cutter, can do that for themselves. Most people, though, need help from their manager. That’s why the ability to inspire people is such a critical dynamic for bosses.

What is your organization all about? Saving Lives? Feeding the World? Putting a ding in the universe? What is the inspirational mission or vision of your organization? If your organization doesn’t have one, find a way to frame your purpose into something bigger and more important than any one individual. Then, help your people connect to that and you will inspire them. Transcendent Purpose is what Dan Pink calls one of the three intrinsic motivators; those things that motivate us from inside which are the most powerful of all motivators.

One Reply to “The Three Stone Cutters”