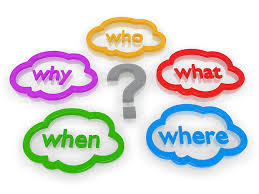 During the first two weeks of starting my last job, I made it a point to sit down with every member of the leadership team and office staff for a one-on-one meeting. The purpose of these meetings was to learn. I wanted to learn about each person, how they viewed the operation, their personality and style, and something about their plans and dreams. I conducted 30 interviews and asked each one of them them same set of questions. One of the questions was, “What’s one thing could we improve right now that would make the most difference? 60% of the people said, “communication.” It was the number one answer. I wonder what the results would be of a similar question in other organizations. How important and how effective is communication in your organization?

Next is the message. What is it the person or group wants to convey?

I know, I could have said, “How,” but then it wouldn’t be 5 W’s. Here we’re talking about the channel or medium of communication. Is it verbal? If so, is it a meeting, an individual conversation, a small group? Is it written? In that case, is it a memo? Is it an email or an article or a hand-written note? Is it physical or mechanical?

Who is the intended recipient of this message? Is it a single person or a group? Are they inside the organization or outside? Are they friendly or adversarial?

How will we know if communication has taken place or been effective? By the feedback it generates. Like an electrical circuit, the amount of electricity at the source doesn’t matter. There is no effect (the light doesn’t come on or the motor doesn’t run) unless the circuit is closed. Feedback closes the communication circuit demonstrating the effect of the source’s message.

That’s a sixth “W,” but it’s not part of the list of components of communication. It’s the question I’m asking about those 5 “W’s.” Why bother thinking about those? Think about how altering only one element will change the dynamic of the communication completely. For example, let’s say all the front line workers in your organization (the to Whom), received a letter attached to their paycheck envelope (the Which Way) that said, “You should all take next Friday off.” (the What). What would be the effect of that communication (the with What effect)?

My example highlights two things. First, an additional factor to consider is context. If the boss was giving Friday off as a bonus because the organization is doing well, that’s one thing. If, however, the organization is struggling financially and that day off is without pay to save money, that’s a whole different dynamic. The second thing my example highlights is the necessity of the “with What effect” “W.” Feedback lets the originator know whether or not the message had the intended effect or outcome. How would the boss or the union organizer know what effect the note had? The concrete evidence would be how many people showed up to work next Friday.

The point is that you can improve organizational communication by paying attention to each component of the communication process. Good decisions about who should deliver the message, clarifying the content of the message, how it should be delivered, who should the recipients be, and how to assure you receive feedback will help to eliminate the many problems that arise from poor communication.

One Reply to “The 5 “W’s” of Organizational Communication”