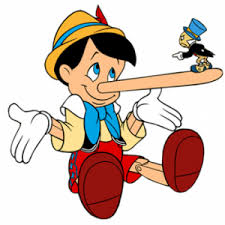 To Be Honest (TBH), …, I’m not gonna lie, …, To tell you the truth, …, Honestly, …, It’s interesting how many phrases we use in every-day conversation to emphasize the truthfulness of what we’re saying. Does it sometimes make you wonder whether everything else the person says, without using one of those phrases, is true? If I say, “I’m not gonna lie,” does it mean I’ve lied before? How many times? It might just be me, but it seems like this speech pattern is becoming more popular. What does that mean about the status of truthfulness in our society?

Several years ago, I was asked by one of the division presidents to attend a president’s meeting with the CEO in his stead. All attendees were senior leaders of the different divisions of the company. It was fascinating to watch. Whenever the CEO said something, every head in the room bobbed up and down in agreement . . . except one. This guy not only didn’t “bobble head” he often shook his head and at times said, “No, that’s not a good idea.”

The first time he said that I thought everyone else in the room would get whiplash, their heads whipped around so fast to see who had dared to disagree. The tension in the room was thick. The CEO seemed a bit taken aback at first, probably because he wasn’t used to that. But, then he amazed everyone when he said, “Why do you say that?” The conversation after that was lively and productive.

In the weeks and months following that meeting, I noticed that the CEO, who was nobody’s fool, kept the naysayer close to him. Why? I believe he appreciated someone who would be honest about their view of things. In short, he trusted the honest one.

How important is trust in a relationship, any relationship? Maybe you would agree that it’s hard to imagine a relationship at all without some level of trust. Without trust, energy bleeds off an organization because it is wasted on second guessing and one upping. That wasted energy depletes productivity and synergy. On the other hand, when you have a high level of trust in an organization, there is a multiplication of productivity and synergy. Instead of the energy wasters you have freedom and ingenuity.

Honesty builds trust. Dishonesty destroys it. Just like with anything, building takes much longer than destroying. Have you every watched a video showing the demolition of a huge building in one blast? That’s what dishonesty does to trust. Three, two, one, it’s gone!

The word “Honest” means: “free of deceit and untruthfulness; sincere.” People who are honest are genuine about what they think and how they feel. There is no pretense. There are no hidden agendas or ulterior motives. They say what they mean, and they mean what they say. We may not like what they say but we know it’s the truth. That’s what builds trust. And, TBH, we need a lot more of that.