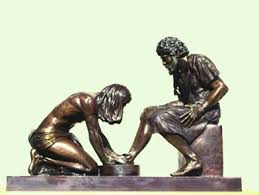 I used to work for a large company based in the Chicago area. There was a statue outside their corporate headquarters’ front door. The title of the statue was “Servant Leadership.” It was a modern style depiction of Jesus washing his disciple Peter’s feet. It wasn’t the one pictured here, it was a sleek all-white marble statue and it made a statement to anyone who walked through the front door.

Once inside, the statement continued. Carved in a large marble wall in the main entryway were the publicly traded, multi-billion dollar corporation’s four corporate objectives. They were:

When you talked to people inside the organization, you learned they further understood their objectives as “Purpose Objectives” – Why we’re in business (To Honor God, To Help People Develop) and “Means Objectives” – How we stay in business to accomplish our purpose (Excellence and Sustainable growth). This company was about serving. It even had “Service” in it’s name. From the CEO all the way through their management academy, serving was the soul of the firm.

A Key to Serving as a Leader

In his 1970 seminal essay on “Servant Leadership” called “The Servant as Leader,” Robert K. Greenleaf made the following observations:

One of our very able leaders recently was made the head of a large, important, and difficult-to-administer public institution. After a short time he realized that he was not happy with the way things were going. His approach to the problem was a bit unusual. For three months he stopped reading newspapers and listening to news broadcasts; and for this period he relied wholly on those he met in the course of his work to tell him what was going on. In three months his administrative problems were resolved. No miracles were wrought; but out of a sustained intentness of listening that was produced by this unusual decision, this able man learned and received the insights needed to set the right course. And he strengthened his team by so doing.

Why is there so little listening? What makes this example so exceptional? Part of it, I believe, with those who lead, is that the usual leader in the face of a difficulty tends to react by trying to find someone else on whom to pin the problem, rather than by automatically responding: “I have a problem. What is it? What can I do about my problem?” The sensible person who takes the latter course will probably react by listening, and somebody in the situation is likely to say what the problem is and what should be done about it. Or enough will be heard that there will be an intuitive insight that resolves it.

The company I mentioned above emphasized listening to employees and listening to customers as keys to pursuing excellence and growing profitably. Robert Greenfleaf’s comments put listening at the heart of servant leadership.

Employees across companies around the world cite “poor communication” as a major issue in their organizations. With our modern communication-enhancing capabilities like text messaging, email, social media, and video conferencing, how can this be? Another answer to Greenleaf’s question, “Why is there so little listening?” may be because there is too much talking. You see, when everybody’s talking, nobody’s listening. We would do well to consider the proportion of our ears to mouth when we engage with others, and listen twice as much as we talk.

The leader Greenleaf refers to above was successful because of what he learned. He learned because he listened. When we’re talking, we’re not learning.

One Reply to “Serving as a Leader”