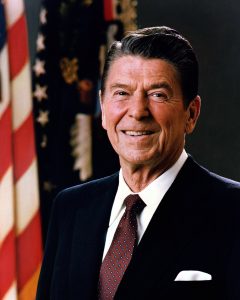 I was at the thrift store with Suzi the other day and I picked up a little hardback book that I just finished reading this morning. It was called The Deepest and Noblest Aspirations, The Wisdom of Ronald Reagan. I was partly nostalgic in picking it up because 1980, when he was first elected, was the first Presidential election when I was able to vote. Whether you agreed with him or not, it’s hard to argue his significance, especially when he won 49 states in the next election!

“Pride in our country, respect for our armed services, a healthy appreciation for the dangers beyond our borders, an insistence that there was no easy equivalence between East and West–in all this I had no quarrel with Reagan. And when the Berlin Wall came tumbling down, I had to give the old man his due, even if I never gave him my vote.”

The book is full of quotes under chapter titles like “On Sports, On Freedom, On Communism (the first three).” There is also one “On Leadership,” and, of course, one “On Humor.” Three specific quotes stood out to me in light of our times. Here they are:

On August 23, 1984, at the Republican National Convention, Reagan said,

“Of the four wars in my lifetime, none came about because the U.S. was too strong.”

On January 16, 1984, during an address to the Nation from the White House, Reagan said,

“History teaches us that wars begin when governments believe the price of aggression is cheap.”

During his announcement of candidacy for U.S. President on November 13, 1979, Reagan said,

“A troubled and afflicted mankind looks to us, pleading for us to keep our rendezvous with destiny; that we will uphold the principles of self-reliance, self-discipline, morality, and above all, responsible liberty for every individual that we will become that shining city on a hill. They tell us we must learn to live with less, and teach our children that their lives will be less full and prosperous than ours have been; that the America of the coming years will be a place where–because of our past excesses–it will be impossible to dream and make those dreams come true. I don’t believe that. And, I don’t believe you do, either. That is why I’m seeking the presidency. I cannot and will not stand by and see this great country destroy itself. Our leaders attempt to blame their failures on circumstances beyond their control, on false estimates by unknown, unidentifiable, experts who re-write modern history in an attempt to convince us our high standard of living–the result of thrift and hard work–is somehow selfish extravagance which we must renounce as we join in sharing scarcity. I don’t agree that our nation must resign itself to inevitable decline, yielding it’s proud position to other hands. I am totally unwilling to see this country fail in its obligation to itself and to the other free peoples of the world.”

One Reply to “Remembering Reagan”