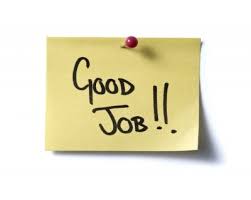 When was the last time you were recognized for doing a good job at work? The answer to that question and the emotions it brings up are all that needs to be said about the importance of this topic. I’ve taken the liberty to write a little bit longer on this one. I hope you’ll find it useful.

“Consequence” is an interesting word. It means “the result or effect of an action or condition.” It also means, “the importance or relevance of something.” If you put those two meanings together you will understand the power of this Engager Dynamic – Recognize. Actions have consequences; effects and relative importance. At work we can help people understand the importance of their actions and promote those important actions by controlling the results through recognition.
“Recognize” means “to acknowledge the existence, validity, or legality of something.” It also means, “to identify (someone or something) from having encountered them before; know again.” These two meanings together also add to the power of recognition at work. people want to be doing important things but they also want to be known.
One day my youngest daughter saw me wearing a new shirt. She liked it on me and said, “Hey, nice shirt, Dad! I see you.” That phrase, “I see you,” caught my attention. I thought it was cool, but I also wondered where it came from. It turns out there is some pop culture that references the phrase, but I believe its roots are in an African expression from the Zulu people. Sawubona is a Zulu phrase that means, “I see you.” It is more profound that just physical seeing. It has to do with recognizing the deep significance of the other person. Can you imagine the power of that kind of recognition at work?

How often should people be recognized? If you think about what we just said, the real question is, “When would you ever not recognize someone?” But, in terms of a work-related recognition program, a good rule of thumb is about once a week. Here’s why: Whenever a person does something, there are consequences. Those consequences will affect whether they engage in that behavior again. We know that to get the result or consequence we want, we will repeat the behavior that led to that result. Frequent recognition will encourage the behavior that produces it.

Recognition needs to be Specific. It’s one thing to say, “Great job!” and mean it. But, it is much more meaningful to tell someone specifically what they did and why it was so important. “Rob, great job cleaning that floor, the customer noticed how shiny it was and said, ‘it hasn’t looked that good in years’. You’re really helping us build a great relationship with this customer. Thank you.”
Recognition should also be Predictable. Certainly, if I receive corrective action for bad work or mistakes but never receive recognition for good work that will be demoralizing. Or, if I’m working hard and I get recognition one time and not another time that leaves me confused about my work. Recognition should be predictable enough that it helps people understand the standard and desire to go above and beyond. I should know what a good job looks like because my supervisor has told me enough times.
Recognition should be Frequent. As mentioned above, we should give recognition at least once per week. When you include “formal” recognition (awards, achievement of status, etc.) and “informal” recognition (verbal, a hand written note of thanks, etc.) it should be even more often.
Recognition should be Instantaneous. We want to reinforce behaviors as immediately as we can. This associates the award more directly with the desired outcome or achievement. If we wait for a month before giving recognition it can seem anti-climactic and be counterproductive. It can actually discourage someone from repeating the behavior. The thinking is, “If I have to wait so long it must not be that important.”

In their book, First, Break All The Rules: What the World’s Greatest Managers Do Differently, the authors say one of the rules Great Manager break constantly is the “Golden Rule.” That rule says, “Do unto others as you would have them do unto you.” But, the authors argue, the World’s Greatest Managers recognize that people are different. What you want, in the way of recognition for example, may be completely different from what one of your employees wants.
Have you ever heard of the “5 Love Languages”? Gary Chapman wrote a book called, The 5 Love Languages: The Secret of Love That Will Last. It’s a book primarily focused on marriage but the principles are true for any interpersonal interaction. For our purposes, we’re looking at how to communicate recognition in meaningful ways.
In the book, Mr. Chapman says “Love” is communicated in many different ways. Like people speaking different languages, if I don’t understand the words you’re saying I won’t know whether you’re saying, “I love you,” or, “That’s a funny hat you’re wearing.” The message has to be communicated in a language the hearer understands. The responsibility for proper communication rests on the one delivering the message. As the title suggests, Gary identifies 5 “Love Languages;” five different ways people understand and communicate Love. They are:
We tend to communicate in the language we understand. So, If someone feels loved when a person gives them words of affirmation they will tend to use the same language when wanting to communicate love to someone else. But, if that person speaks in the language of Gifts, they may totally miss the message that the first person wanted to deliver. We need to understand how other people receive “love” in order to give meaningful recognition.

My brother-in-law once told his boss, “Praise doesn’t pay the bills.” He’s good at almost everything he decides to do but he’s not the type of person who thrives on being told he’s good at it. It’s not his love language. Based on his statement, what do you think would have been more meaningful to him? He would have responded better to some kind of financial reward. There are people, on the other hand, who would have the opposite response. They would feel slighted by a cash reward because they feel valued by other expressions, maybe lunch with the boss.
In other words recognition doesn’t have to be and shouldn’t be “one-size-fits-all”. We need to give recognition, but we’re better off not doing it than doing it half-heartedly. Make it personal so it’s more meaningful.