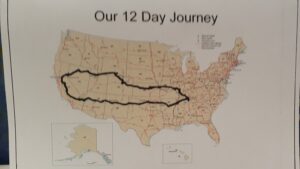 Suzi and I just returned from a two-week vacation. It was a driving vacation that touched 14 states over 4,900 miles. We love driving across country. We did a similar trip last year, too.  It’s relaxing and fun to drive through the changes in topography and to see the countryside and the cities.

Our first night was in Salt Lake City. After that we stopped in Denver to have dinner with Suzi’s sister and her husband and Suzi’s sister-in-law. The next day it was on to Kansas City where we spent two nights and a day with our oldest daughter (the Klutz who became a dancer). After that we stopped in St. Louis to have dinner with a friend on our way to a layover in Mt. Vernon, IL. The next day we reached our eastbound destination, Nashville. There we spend three nights with dear friends who had driven up from Atlanta.

We decided to return home by a different route. That trip involved no visits with friends or family but took us to stops in Oklahoma City, Gallup New Mexico, and Bakersfield California. Bakersfield is only 3.5 hours from home but we decided it was better to rest, leave at a leisurely pace the final morning and arrive refreshed rather than arrive home at midnight wrung out from the road.

This series of posts is about the power of stories (starting the first week of October with my Black Swan story) . Over the next couple of weeks I will share few stories from the trip in more detail.