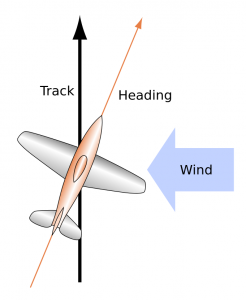 Small changes can have huge consequences.

In 1979 a passenger jet carrying 257 people left New Zealand for a sightseeing flight to Antarctica and back. Unknown to the pilots, however, there was a minor 2-degree error in the flight coordinates. This placed the aircraft 28 miles to the east of where the pilots thought they were. As they approached Antarctica, the pilots descended to a lower altitude to give the passengers a better look at the landscape. Although both were experienced pilots, neither had made this particular flight before. They had no way of knowing that the incorrect coordinates had placed them directly in the path of Mount Erebus, an active volcano that rises from the frozen landscape to a height of more than 12,000 feet (3,700 m). Sadly, the plane crashed into the side of the volcano, killing everyone on board. It was a tragedy brought on by a minor error—a matter of only a few degrees.

One Degree Off Course

Experts in air navigation have a rule of thumb known as the 1 in 60 rule. It states that for every 1 degree a plane veers off its course, it misses its target destination by 1 mile for every 60 miles you fly. This means that the further you travel, the further you are from your destination. If you’re off course by just one degree, after one foot, you’ll miss your target by 0.2 inches. Trivial, right? But…

That would be like heading for Chicago but landing in Memphis instead. That would be inconvenient, wouldn’t it? Off course can be inconvenient or deadly like the New Zealand flight. I’ve read that commercial aircraft are off course 90 percent of the time. Turbulence and other factors cause them to go off course but constant feedback from the instruments allows the pilot to make adjustments and return to the flight plan.

We can get distracted and get off course in our lives and careers as well. Regular instrument checks and adjustments are a good idea.

Replace “Off” with “Change”

What if we took the same principle of “one degree” and replaced “Off Course” with “Change Course?” Now we have a whole new conversation. Now we’re talking about making an intentional change in the trajectory of our life. The same principle applies. A slight change of one degree can make a huge difference. That’s encouraging. You don’t necessarily have to do a complete about-face to make a big difference.

In his book, Atomic Habits, James Clear writes about a time when he wanted to eat healthier. In a section of the book that talks about the power of our environment on our habits, Clear tells how one small change made a huge difference. He used to buy apples and put them in the crisper in his fridge . . . never to be seen again until they were rotten and had to be thrown out. The simple change? He started putting the apples in a big bowl on the kitchen counter where he could see them every time he came into the kitchen. Not a huge about-face, a slight change, but now he is eating the apples instead of throwing them away.

Whether we’re off course or changing course, a slight shift can make a huge difference. That can be a warning or an encouragement depending on your perspective. Which is it for you?

One Reply to “Off Course”