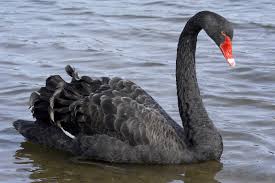 Several years ago I took my young family on vacation to Myrtle Beach, South Carolina. It was just Suzi, our oldest son, Joshua, and me at the time. The resort had a tall hotel on the beach and a condominium style set of single story units arranged around a beautiful pond behind it which is where we stayed. When we first arrived and were checking the place out, I noticed three beautiful black swans gliding across the water on the pond. I grabbed Joshua and the camera and said, “Let’s go see the swans, buddy.” As we approached the water’s edge, the swans gently turned and started to swim in our direction. “Cool,” I thought, “if they get close enough, we’ll be able to get a great picture.”

I got to the edge and crouched down holding Joshua between my knees to keep him steady by the water. By this time the swans were moving in our direction. “Look at that, Josh,” I said, “they’re coming to get their picture taken.” While I watched the swans through the viewfinder of my kodak instamatic camera three things suddenly began to occur to me all at once. 1. Items seen through the viewfinder of this camera appear farther away than they actually are, 2. I had a vague recollection that someone once told me swans are mean, 3. The two outside henchmen swans had stopped swimming and the bigger boss swan was coming up out of the water right at us.

I dropped the camera, quickly picked Joshua up and started backpedaling as fast as I could. I slipped on the wet ground, got up, lifted Joshua into the air and turned away from the attacking swan in one movement. Just then the monster swan reached out and bit me on the butt. I screamed like a little girl (no offense to little girls intended) and ran to the deck where my lovely wife was laughing hysterically. The black swan literally did a victory dance around the deck with it’s wings flapping and then went back to join it’s henchmen in the pond.

To make matters worse, there was a group of construction workers across the pond on top of some scaffolding who had seen the whole thing, too. The roar of their laughter from across the pond completed my humiliation.

So, my Black Swan Event was literally a black swan.

So Why The Story?

I began with that story a few years ago at a high school graduation where I’d been asked to give the commencement speech. I felt less humiliated when they roared with laughter, probably because I hammed it up and acted out some of the story. They especially liked when I grabbed my butt while describing where the swan bit me.

As I explained to that audience, my black swan story had nothing and everything to do with the topic of the speech. They agreed when I suggested that my story had connected us in an unexpected way. Many of them didn’t know me and I only knew a few of them. But, because of my story, they now knew they liked me and believed they could trust someone who would be that funny and vulnerable in public.

The topic of my speech was the power of stories. This was a Christian School so I went on to show how God uses stories throughout the Bible to connect with us, to inform us and to persuade us.

Then I turned to the graduates. “Most of your story is yet to be written,” I said. I played the Natasha Bedingfield song, “Unwritten” for them and then challenged them to think about what kind of story they were going to write and how their story might impact the world. Stories are powerful.

Regardless of where you are in life, whether you’re retired, you’re approaching “retirement age,” are in college, or you’re in the middle of life, family, and career, the same thing that was true of those high school graduates is true of you. The rest of your story is yet unwritten.

I’d like to encourage you to do two things. First, use your story up to this point to connect with people. Don’t be afraid to let people get to know you a little bit by sharing some of your story. Second, think about how the next few chapters of your story will go. Will they be about consistency, surprise, struggle, achievement, overcoming? How will your story impact others? I’d love to hear some of your story in the comments below this post.

One Reply to “My Black Swan”