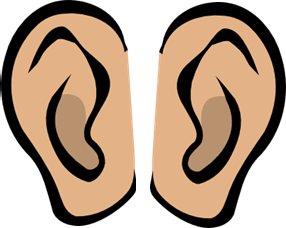 “You can listen as well as you hear”

But we usually don’t. I believe that was the point of the lyric from the 1989 (US Release) song, “The Living Years” by Mike and the Mechanics. One of the verses of that song goes like this:

Doesn’t that sound like too many of our relationships? Whether in families or company meetings, there is a lot of talking that goes on. But, much of it misses actual communication or connection either because people are talking at the same time or because they are speaking “different languages” or they are hearing but not listening. The chorus to the song above says,

Say it loud, say it clear
You can listen as well as you hear ,,,

And you can, but there is a difference between listening and hearing.

Hearing – is the physical response of the body (your ears) to sound. Your ear hears the sounds whether you listen to them or not. Hearing may be completely active (as when one is attending a concert) or passive (where the person may or may not focus on the sound as with background noise) or, in many other cases, a combination of both.

Listening – is a conscious recognition of the sounds you hear. It is active, and it is a skill. The intent of the listener is to understand what this being said, what was meant by it, and then to determine the appropriate response, if any.1

There is a salient piece of wisdom found in the pages of the Bible. In a general letter written to Christian believers, James (the half-brother of Jesus) wrote:

“My dear brothers and sisters, take note of this: Everyone should be quick to listen, slow to speak and slow to become angry.” (James 1:19)

Wow, we almost always get that backwards. How many times are we quick to speak, slow to listen (if at all) and quick to become angry? In fact, quite often when we are “listening” we’re actually formulating what we want to say next. I would argue that that’s not listening at all.

If we take James’ advice and consider our natural proportions it would seem to suggest that we should listen at least twice as much as we talk. There is something even deeper in this piece of wisdom. There seems to be a parallel in James’ mind between the amount of listening and the amount of anger. When we talk first, chances are the other person is doing the same thing. It’s human nature. When two or more are talking at the same time we become frustrated because we can’t get our point across. This is the atmosphere in which anger grows. We do this for several reasons. Among those may be

It Takes More Than Just Ears

Hearing requires functional ears. Listening requires discipline (and can be done even without ears). The first discipline for good listening is to close our mouths. There are other disciplines critical to excellent listening related to hearing that we should work to develop. Among them are:

The last line in the chorus to the Mike and the Mechanics song is:

Let’s not be the people in the song.