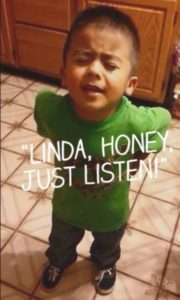 “OK. Listen, listen, listen, Linda, just listen,” pleads then 3-year-old Mateo when debating with his mom over whether or not he should get a cupcake. If you haven’t seen this video, watch it here. Mom replies, “You’re not listening to me.” To which Mateo immediately retorts, “Because your not listening to me!” Wow! What a perfect representation of what’s wrong with so much communication. Ellen DeGeneres lunched the video to viral status when she had the Mom and son team on her show. The video is cute and Mateo is very articulate. But, I wonder if at least one reason it became so popular (no shade to Ellen) is that people everywhere (not just parents and kids) could relate to the issue it unveiled, No one is listening!

Last month I wrote about Organizational Communication. But a message sent is not communication unless it is received and understood. That requires listening. In fact, I would argue that listening is the most important element in effective communication (we have two ears, after all, and only one mouth). Well-known broadcaster, Celeste Headlee, in her famous TED Talk “How to Have a Good Conversation,” (over 5,000,000 views) says listening is the most important skill you can develop. She supports this claim with a quote from Buddha, “If your mouth is open, you’re not learning.”

Even though we spend a around a quarter of our time speaking and just over half our time listening (a 2:1 ratio), the following are true:

So, why don’t we listen?

Celeste Headlee suggests two reasons. First, she says, “we’d rather be talking.” When we’re talking, we’re in control. We don’t have to hear things we’re not interested in, we’re the center of attention, so we can bolster our own identity. The other reason Headlee offers is that we’re distracted. She mentions the fact that we can speak at about 125 words per minute but we can listen at between 500 and 800 words per minute. Our minds fill in the extra words. I call this “Bonus Brain Time” in my Listening course.

Because of Bonus Brain Time, it takes a lot of work and discipline to listen. That’s another reason we’re not so good at it. We either have not learned how to discipline ourselves or we’re not willing to put in the work.

I’ll offer one final reason we don’t listen well. We’re selfish. Let me put it in the words of Stephen Covey, who said it much more eloquently.

I guess Celeste made the same point when she said, “We’d rather be talking.” We’re more interested in making our point than in understanding the point of another.

So, why should we listen?

I’ll offer one more reason to listen. You are far more likely to be amazed. Though we may like to talk about ourselves, the truth is, we know our story. Other people are often far more interesting to us. Celeste Headlee made this point in her video as well. She said she grew up believing everyone had some hidden amazing thing about them. She believes she is a better radio host because she keeps her mouth shut as much as possible, she keeps her mind open, and she is constantly prepared to be amazed. “And,” she said, “I’m never disappointed.”