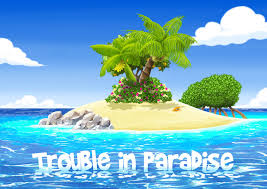 I drove up to The Ranch one afternoon shortly after we bought it and noticed water dripping from the insulation underneath, near the front middle of the RV. Uh Oh. I went to the side and saw a gap between the screws holding up the insulation and pulled down slightly to see if I could find out anything about the source of the water. When I pulled down it created a low spot at the edge of the RV and out poured a lot of water that had been sitting in there. The good news is the water was clear, meaning it was grey water at worst, fresh water at best. In case you don’t know, RVs have three kinds of tanks. One holds freshwater for if you’re camping somewhere without a connection to city water. Another holds “grey water” which is the wastewater from your sinks and shower. “Blackwater” is the wastewater from your toilet. Now you know why I said clear was the good news.

The dealer we bought the unit from had gone to great lengths telling us how differently they do business, that “As Is” (which is how used units are sold) doesn’t mean “you’re on your own once you drive off the lot.” He told me how they inspect the units carefully to be sure all the systems are working and that if there was anything they missed I should call him directly and “hit him between the eyes with the news.” So I called him. He asked me to send him some pictures which I did. I will admit, I was skeptical he would do anything. My skepticism seemed justified when he said on the phone, “I don’t know what to do, Jim. My repair guy won’t travel that far.”

I decided to try something. I called a local dealership and asked if they had or knew of someone locally who would come to my site and work on my rig. To my surprise, they referred me to a guy named Chris. I called him and described my situation. I told him I was hoping to get the guy I bought the unit from to pay for the repair. He didn’t think that was going to happen and told me he thought it would cost around $1,400 to repair my leak and good luck getting the dealer to pay for it. “I’ve worked with guys like that before,” he said.

I called the dealer and told him I’d found a local guy who would come look at it. He was skeptical. He said, “I’ve worked with guys like that before (funny huh?) “They’ll take you to the cleaners.” When I told him what Chris had estimated the costs to be, he said “See, he’s setting you up for a big bill.” But, to my pleasant surprise, he agreed to talk to Chris.

Chris agreed to talk to the dealer but said he would only come if he paid for the service call upfront, $100. I gave Chris the dealer’s number and a little while later he called me back to set up an appointment.  Wow! I thought. This might work out after all. Chris explained what he and the dealer had worked out about how to approach the diagnosis of the problem and asked if I was OK with that. When I agreed he said, “I’ll see you then.”

Chris actually showed up. He drove up in his car, popped the trunk where he had a toolbox and a creeper (a board with casters for rolling around under things on your back). I hung out with him while he worked because I like to learn new things and I wanted to understand what was under The Ranch and what he would be doing to fix my leak. He cut into the underbelly insulating cover and peeled it back.  He discovered that one of the greywater tanks was completely full and, instead of backing up into the kitchen sink like it was supposed to when it was full, it was overflowing underneath.

That was actually good news. I was happy it wasn’t anything that needed to be replaced. It did raise a question, though. How did that tank get so full? I had emptied the grey water tank. It turns out there was a valve to open this tank located away from the other valves for the black water tanks and the other grey water tank. I hadn’t seen it. We opened that valve and the water drained out. The system shouldn’t work like that but it’s something I can manage now that I know. So Chris left to call the dealer with the report and get paid and I was happy with the result.

So What? – The Flexibility of Stories