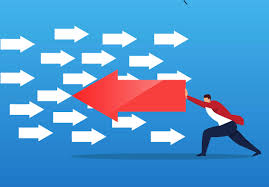 Creating positive change is the ultimate test of leadership according to leadership coach and author, John Maxwell, in his book Developing the Leader Within You 2.0. To create change you need buy-in.  “Buy-in” is a phrase that comes from the stock market. It means to purchase shares of a company by which you are not employed. So, you are willing to invest your hard-earned money to bet on the success of a company over which you have no control. You must certainly believe in the prospects of that company if you’re willing to do that. That’s how the phrase came to mean “agreement to support a decision or direction.” Creating change requires that key people buy-in to what you’re proposing with your change idea.

Here’s another interesting point from John Maxwell, “People buy into the leader, then the vision.” That’s what he calls “The Law of Buy-In” from his book The 21 Irrefutable Laws of Leadership.  If people believe in you, they are more likely to believe in the change you’re trying to create.

1. Fear of Awkwardness
2. Fear of Leaving Comfort Behind
3. Fear of Ridicule
4. Fear of Isolation

What are some things a leader can do to demonstrate sensitivity to these fears when introducing change?

Have a Good Reason

People want to understand the “Why?” We can see that from the title of Simon Sinek’s book Start with Why: How Great Leaders Inspire Everyone to Take Action.  Why are you considering this change? Change for change’s sake is not a good idea unless everyone is already bought into the idea and there is usually a creativity reason behind that.

The reason may be as urgent as a “burning platform,” which means the consequences of maintaining the status quo are so dire that change must be embraced. Or, the reason may be far less urgent but equally as important, like a huge opportunity that will bring growth and expansion to your organization.  In either case, people are much more likely to embrace the change when they understand why you are proposing it.

My family has moved several times. We’ve lived in 9 states and one foreign country (so far). Our youngest daughter, Janessa, builds strong friendships with a few people and has had a hard time leaving them when we’ve moved.

Each time we face a new neighborhood and school, she is afraid of not having any friends. We have encouraged her by asking her about the friends she just left behind. “Do you remember when we moved there,” we ask, “do you remember when you first met that friend? You didn’t even know they existed before that day, and now they’re such a good friend.” That will happen again. You will meet new friends and they will become close, too.

Reviewing the past can help face the future. Whether your team or organization has had a history of success to point to, or there has been failure,  the experience of the past can embolden people to face change. Pointing to the past tells people they can do it again. They can experience success or survive failure and be stronger for it, again.

Stanford psychologist Carol Dweck studied mindset in education. She has found there is a difference between the outcomes of students who have a “fixed mindset” and those who have a “growth mindset.” A fixed mindset believes that things like talent and intelligence are fixed and unchangeable. A growth mindset, on the other hand, believes that through dedication and work, these abilities can be developed and strengthened.

One key is to focus not on how “smart” a child is, but on the effort they put into a certain project. Effort more than outcome encourages growth. “Smart” is fixed, effort can be endless.  That’s why Dweck encourages focusing on effort, to encourage a growth mindset.

The point for our purpose is that when encouraging a growth mindset, we acknowledge that things will be difficult, but we never forecast failure. We say,  “this is going to be a challenge, but I know you/we can do it.” Acknowledging the pain demonstrates your credibility which gives people reason to believe in you. It also lets them know you believe in them.

These three things; having a good reason, reviewing the past, and acknowledging the pain will help alleviate the fears associated with change and set you up well for taking the next steps which we’ll talk about next week.

One Reply to “Leading Change – Part 3”