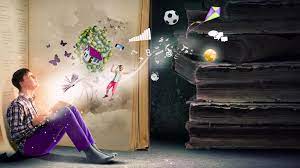 What is your favorite word? You have over a million to choose from if you consider the total number of English words. If your list is limited to the most commonly used words, then your choices slim down to around 170,000. Each individual uses only between 20,000 and 30,000 words so your favorite probably comes from your version of that list.  The most commonly used word in the English language is the word “the.” I’ve used it 5 times in this paragraph. It’s not my favorite but it’s very useful.

I have a good friend whose favorite word is “Imagine.” He has a wood carving of the word prominently displayed in his work area. Imagine is a good word and it’s moving up my list of favorites lately. Imagine is what we do with our imagination.

Not Just For Kids

Sometimes we associate things like imagination and wonder with children. We smile while we watch them take off in a rocket ship made from the cardboard box the new dishwasher came in, or when we see them staring for a long time at a bug. What happens to that in us?

I heard the story of a school administrator who asked a large group of kindergarten students, “How many of you can draw?” Almost every hand went up. Then he asked the same question of a similar size group of High School Seniors. Only 4 or 5 hands went up. Why the difference? Reality set in? Maybe. In his famous TED Talk called “Do Schools Kill Creativity?” Sir Ken Robinson suggests that we systematically stifle and kill creativity in people by the way we teach. Creativity is the outward expression of imagination.

Stephen Covey said, “Everything is created twice. First in the mind and then physically.” Before you ever pound a nail to build a home, you first draw up blueprints. Even before the blueprints, which are a physical picture of the house, you imagine how you want it to be. Then you draw it, then you build it. So, imagination is more than just kid’s stuff.  We use it all the time.

I haven’t called “Word Nerd Alert!” in a while so here we go. The online dictionary definition of Imagination is – “the faculty or action of forming new ideas, or images or concepts of external objects not present to the senses.” In other words, it’s the ability to picture things in your mind’s eye that are not present in physical reality.

Think of a dog. What came to mind? I can guarantee you it wasn’t the letters D-O-G. It was a picture of a dog.  Maybe it was your dog or a neighbor’s dog or the dog you had when you were growing up. But it was a picture.

How many external doors do you have in your house? Chances are you don’t have that number memorized so how would you be able to answer that question? You can walk around the inside and outside of your house in your mind (imagination) and “see” the doors so you can count them.

We use our imaginations all the time. If you think about it, we couldn’t drive anywhere or give someone directions without using our imagination, without mentally picturing the route. In fact, when we give directions, we’re attempting to transfer the picture in our mind to the other person’s mind so they can get where they’re wanting to go. Interesting.

We use our imaginations all the time. But, the vast majority of the time, we’re using them descriptively. We use them to recreate in our minds a picture of what we’ve experienced in physical reality.

It’s like one of those TV shows where teams compete with each other to make the best cake. Those teams get an idea in their minds of what their cake will look like, then they start working with what they have to make the physical version of what they imagined.

What might happen if more of us dared to use our imaginations prescriptively again? What if we spent some time making pictures in our minds of positive things we would like to see? Imagine!