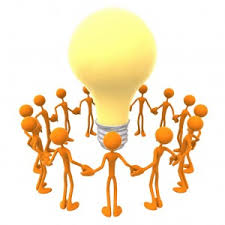 Think of something. Anything. Chances are, whatever you thought of started with an idea. Someone, somewhere said, “I have an idea.”

“Everything begins with an idea.” — Earl Nightingale

Your organization started as someone’s idea. The screen you’re reading this on started as someone’s idea. The way you do a certain thing is a manifestation of an idea about how it should be done. In my post on the Engager Dynamic called “Solicit,” I talked about where the best ideas about improving work come from. They usually come from your front-line employees. The ones who have their hands on the work every day most often have great ideas about how to make it better, easier, more efficient, higher quality, safer.

We all know what often happens when someone brings up an idea. The Glums in the room usually speak up first. One might say, “We already tried that and it failed.” Another Glum response is, “That will never work and here’s why.” Sometimes you don’t even get the “… and here’s why!” Pessimism abounds. Sometimes it’s not just pessimism, it’s pride. Many people don’t like your idea just because they didn’t think of it.

One famous example of a great idea that was initially shot down is Fred Smith’s 1965 Yale University term paper. Fred had what he thought was a revolutionary idea that would change the way the world does business. His professor didn’t think so. He got a “C” on that paper. Fred later turned that “average” idea into FedEx.

Innovation, creativity, market disruption can only happen when ideas are allowed to flourish. I had a client who mandated that their team “love every idea for 5 minutes.” What do you do when you love someone, especially a child (an idea is like someone’s child)? You feed them, you care for them, you foster their growth and development. When you love an idea, you do the same thing. For this client, the team discussed all the ways the idea could bring benefit and how they could implement it to realize those benefits.

You might not employ the “love every idea for 5 minutes” approach. You may create a no “No” zone, a place where the word “No” is not allowed when brainstorming or discussing ideas. Whatever your approach, making it possible for people to discuss wild ideas safely builds trust. Trust engages people. Engaged people come up with better ideas. Eventually your organization might just become the next FedEx.

One Reply to “I Love That Idea!”