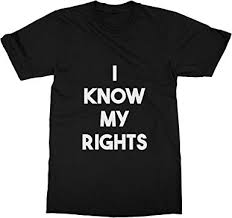 Whether shouted from the streets or from the political platform, we hear a lot about rights these days. Rights are important. We know we have certain inalienable rights such as life, liberty and the pursuit of happiness (Declaration of Independence). We have the right to free speech, freedom of religion and peaceful assembly (1st amendment). We have the right to bear arms (2nd amendment). In addition to the rest of the Bill of Rights we specify human rights, civil rights, women’s rights, etc.

A right in this context is defined as “a moral or legal entitlement to have or obtain something or to act in a certain way.” Rights are a pillar of our Liberty. There’s another word that needs to be defined

Liberty (Freedom) – “the power or right to act, speak, or think as one wants without hindrance or restraint, the state of being free within society from oppressive restrictions imposed by authority on one’s way of life, behavior, or political views.”

Our Freedom is one of the things we cherish most as Americans. It’s what we’re known for around the world, it’s why people from all over the globe are “Coming to America” in the words of the Neil Diamond song. It’s what our men and women in uniform have fought and died to preserve. It’s our way of life.

Our way of life is in danger. Our Freedom is threatened every day. I’m not talking about ISIS or North Korea. I’m not even talking about one political opponent or another. I’m talking about something much more close to home. “Freedom never lasts,” says Os Guinness, “because the greatest enemy to freedom is freedom.” Think about it. When everyone in society is free to act, speak, or think as they want, eventually one person’s “want” and another person’s “want” will come into conflict. That’s why we have laws. I’m free to do as I want, unless that freedom harms someone else. Then I am arrested for breaking the law (by the way, that’s when I have the right to remain silent). Wait a minute! That sounds like a limitation on my freedom. You can see how this begins to spiral.

This is why Benjamin Franklin said,

“Only a virtuous people are capable of Freedom. As nations become corrupt and vicious, they have more need of masters.”

Our Rights, we have said, are a pillar of our Freedom. But they are not the only one. Like legs of a stool, there are three “Rs” that support and stabilize our Freedom. We’ve already mentioned Rights. There is also Responsibility (more on this in a moment) and Respect.

“Show some Respect!” “We demand Respect!” “I don’t get no respect!” Have you heard any of those? Let’s take a moment to define this one as well.

Respect – “a feeling of deep admiration for someone or something elicited by their abilities, qualities, or achievements.”

By this definition, Respect is not something one can demand from another. You can earn it by developing abilities, exhibiting qualities, or achieving something. But, it is not an entitlement or right as defined above. In fairness, Respect is used in a slightly different way in society these days. It seems to mean something like “behavior that acknowledges the value and worth of each person as endowed by our creator.” By even this definition, Respect cannot be demanded. It can be given. That’s the funny thing about Respect. We all want it, but you can’t get it unless you give it. It’s like a seed in the law of sowing and reaping which states, “You always reap what you sow, more than you sow, and in a different season than you sow.” So, there are two ways to get Respect. You can earn it or you can give it but you’ll not get it any other way. And, by the way, Fear is not the same as Respect.

Now to the third “R” – Responsibility

Let’s define this one, too.

Responsibility – “a duty or task that you are required or expected to do: something that you should do because it is morally right, legally required, etc.”

What are our responsibilities? That could become a very long list. So, let’s not think of it in terms of tasks. Let’s think of it like this. It is our Responsibility to become the kind of people Benjamin Franklin said are the only ones capable of a free society, a virtuous people. What does that mean? Here are a few suggested character qualities that might apply:

These character qualities are collectively referred to as “the fruit of the Spirit” by the Apostle Paul. Interestingly, he goes on to say that when people have these characteristics there is no need for laws. (Galatians 5:22-23)

John Adams said, “Our Constitution was made only for a moral and religious people. It is wholly inadequate to the government of any other.”

We are in a dire situation. The stool of Freedom is teetering on one leg. As individuals, as families, as houses of worship, as communities, as a nation, we are overly focused on Rights, our own rights. It’s time for us to return our focus to Respect and Responsibility while at the same time defending each other’s rights. Our Freedom is at stake.