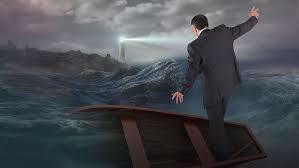 There is a story in the New Testament about one of Jesus’ disciples named Peter who walked on water. As the story goes, the disciples were in a boat crossing the Sea of Galilee one night in high winds and rough waters. Jesus, who had stayed behind to dismiss a crowd and spend some time alone, came to them walking on the water. When they first saw him they were terrified, thinking it was a ghost. When Jesus reassured them he was not a ghost, and that it was he, Peter said, “Lord, if it is you, tell me to come to you on the water.” Jesus said, “Come.” So, Peter climbed out of the boat and walked on the surface of the water for a bit. That’s what I call getting out of your comfort zone!

When Your Comfort Zone Helps You

I wonder what might have been going on in Peter’s head during that conversation. Everything in him would have been telling him to stay in the boat. Sure the boat was in high winds and rough waters, but inside the boat was the safest place to be. In that moment the boat was his comfort zone. He was a fisherman who spent most of his career in a boat. Rough waters and high winds were nothing new to him. “Stay in the boat!” is what I’m sure that voice inside his head was screaming.

A comfort zone is defined as “a place or situation where one feels safe or at ease and without stress.” There is a part of us, sometimes called the “little voice inside our head,” that is very attuned to anything that threatens to disrupt our comfort zone. That’s what was screaming at Peter. When the things that threaten our comfort zone are dangerous, that little voice is very helpful. It keeps us from harm. Maybe you can remember a time, for example, when “something” told you not to do business with a certain person and you found out later they were a crook. Hooray little voice!

When Your Comfort Zone Hurts You

The problem with that little voice is that it’s programmed, not intelligent. By that I mean it reacts the same way to anything that might alter the status quo (comfort zone) whether the change would be good or bad. In the case of a challenge that might lead to great things, that little voice becomes an internal “saboteur,” that could destroy your future. It can’t tell the difference between good change and bad change.

Peter ignored his internal saboteur initially and got out of the boat. I say initially because the story continues. It goes on to say that when Peter saw what he was doing and then saw the waves, he began to sink and Jesus had to grab hold of him and pull him up to safety. We all know what happened. Peter was doing something extraordinary until he listened to his internal saboteur who said, “Look at the waves!” That’s when the extraordinary thing began to crumble.

The End of the Story

Now, let’s give credit where credit is due. Peter got out of the boat, which is more than many of us can say about the challenges or dreams we’re contemplating. What is your “little voice” saying to you about those challenges or dreams? “You’re not ready.” “You wouldn’t know what to do.” “You’ve got responsibilities.” “You can’t be serious.” Is your little voice helping or hurting? Only you can decide.

The twist to the Peter story is that the situation confronting Peter was, in fact, dangerous. In that case, his little voice was attempting to keep him from harm. Peter got out anyway. What he learned about himself and about his relationship with Jesus in those moments, could not have been learned any other way. What do we make of that?

Just after grabbing hold of him, the end of that story is Jesus saying to Peter, “You of little faith, why did you doubt?” When it comes to the challenges or dreams you’re contemplating now, what will be the end of your story?