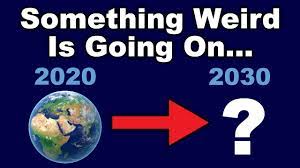 Does the world seem a bit strange these days? There is a lot going on that many people my age and older say seems unusual even for politics and world events. Depending on your political, religious, or cultural leaning, you may be excited or discouraged by what you see happening around you. Now zoom in. Look at your more immediate circumstances. How are things going there? How do you feel about the direction your circumstances are headed? I’m asking because of something I know about our imaginations.

Last week I talked about Imagine and imagination. It’s that amazing ability to visit places and create things in your mind. Creativity, I said, is born out of prescriptive imagination. Creativity is how you take a new thing you’ve imagined from your mind and make it real. That works most easily for concrete things like bridges, and buildings, artwork, and cakes. But what about less tangible things like character and relationships, career path, and health? 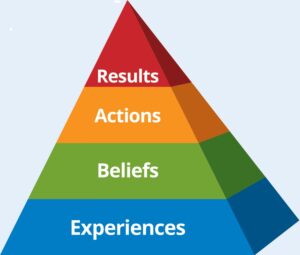 No. This is not a mystical Egyptian religion. It comes from two books called The Oz Principle and Change the Culture, Change the Game. The idea is that results (at the top of the pyramid) come from Actions  (the next section on the pyramid just below results). That’s a “captain obvious” statement. You have to take action to get results. But the next idea is that Actions come from Beliefs. For example, if you believe your boss doesn’t care about the quality of your work, you will act a certain way. On the other hand, if you believe your boss is very demanding about quality, you’ll act differently.

The base of the pyramid is Experiences. Experiences are how we form our Beliefs. If your boss never checks your work and never comments on it then you will believe s/he doesn’t care about the quality. On the other hand, if they frequently check your work and provide feedback you will form a different belief.

So, the “Results Pyramid” says that Experiences lead to Beliefs which lead to Actions which lead to Results. If we try to change results by just changing our actions, we often fail because we haven’t addressed the underlying beliefs.

Now try a little experiment with me. Replace the “Experiences” in the Results Pyramid with “Imagination.” Imagined experiences can be as powerful in affecting our beliefs as real experiences depending on how strongly imagined they are. Now, here’s what I know about our imaginations when it comes to unknown future outcomes and expectations. For a lot of reasons, we tend to default to imagine the worst possible outcome. Another word for that is worry, or, as I like to call it, faith in the worst possible outcome.

Now follow the results pyramid and you can see how a negative imagination can lead to a belief in the worst outcome (worry). That worry will play into the actions you take. When that happens the results are often a self-fulfilling prophecy of what you imagined.

Another Kind of Imagination

Hope! Hope is positive imagination. It is prescriptive imagination for things that are not as concrete. Here’s how the Apostle Paul described it in the New Testament book of Romans, “… hope that is seen is no hope at all. Who hopes for what they already have?  But if we hope for what we do not yet have, we wait for it patiently.” The way Paul talks about hope in this passage it has almost the same definition as imagination.

Hope is not just wishful thinking. Hope is when we intentionally form a positive outcome in our imagination and focus on it like it’s an experience. Belief, then, takes on the role of creativity by dictating the actions that are more likely to bring about the outcome we had hoped for. Leaders, for example, may call this vision.

Negative, worry-filled, hopeless people tend to spiral in that direction. Positive, hopeful people tend to produce much better results. It’s up to you how you use your imagination. Choose Hope!