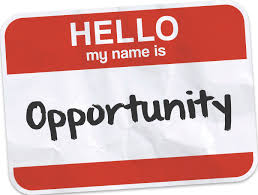 In the last few posts, I’ve been talking about problems and what they do for us. They introduce us to ourselves. Problems introduce us to others. Now I want to talk about how problems introduce us to opportunities. I’m what I like to call a “word nerd.” One of the first things I do when I’m learning something or wanting to communicate an important point is to look up the words being used. Often the definitions open up new insight. I wondered if that might help with this topic.

What is a Problem? – a problem is “a matter or situation regarded as unwelcome or harmful and needing to be dealt with and overcome”

OK. So, what’s an Opportunity? – an opportunity is “a set of circumstances that makes it possible to do something.”

Here’s how this one works. If you take opportunity’s “set of circumstances” and substitute it with problem’s “unwelcome or harmful situation” you get  “an unwelcome or harmful matter or situation that makes it possible to do something.” That’s how problems introduce us to opportunities. The problem, by definition, needs to be dealt with and overcome. In that way it not only makes it possible to do something, it requires us to do something. Whatever that something is, we would most likely not have done it without the problem.

In last week’s post, I talked about people who use problems as stepping stones to success. Am I one of those people? Are you?

Here are some examples of that kind of thinking.

Infectious diseases are a real problem. We know that all to well since the onset of COVID 19 almost a year ago. The story goes that Sir Alexander Fleming was working on a cure for diseases. He tried all kinds of things. Finally, in frustration, he threw away his petri dishes. A little later he noticed that mold was growing on those petri dishes. He also noticed that the mold was killing the bacteria. He started studying what he had found and the result was penicillin which has saved countless lives for over 100 years.

In this case, the solution was in what Fleming threw away. Don’t quit too early or you may miss the solution you’re looking for.  Don’t give up.

Burs on the Dog

If you have a dog and have ever gone hiking you know about burs. Those pesky little balls that stick in the dog’s fur. Even if you don’t have a dog, you know what I’m talking about because they stick to your socks, too. Well, a Swiss engineer named George de Mestral decided one day after a hike in the Alps, to look at those pesky burs under a microscope to see what made them stick so well. What he found was tiny hooks on the burs that allowed them to grab on to the loop weave of socks and to the dog’s fur. That discovery led to the invention of Velcro. Ever heard of it?

In this case, the very nature of the problem led to a world-changing invention. Study the problem. The very thing that makes it harmful or unwelcome, may be what makes it possible for you to change your world.

Three days after the election of 2008, the company I worked for laid me and six other highly compensated, newer employees off. No one was hiring then, at least in my industry. The housing crisis at that time expanded an industry called “property preservation.” It’s where you care for the inside and outside of foreclosed properties. I attempted to get into that industry but was unsuccessful. Unemployment didn’t cover my mortgage so I could see that in a few months I would be without a home. Long story short, I found a job outside my industry that moved us to China for a life-changing (in a good way) two-year experience.

In this case, the problem caused me to take action on something I never would have even considered under different circumstances. That led to a life-changing experience. Think outside the box. Color outside the lines. Try something different.

Some people don’t even talk about “problems.” They substitute the word “opportunity” because their mindset is on what possibilities that harmful or unwelcome matter presents.

One Reply to “Hello, Opportunity, Nice to Meet You”