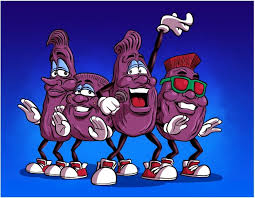 Do you remember these guys? The California Raisins. I’m dating myself a bit. They first appeared on the scene in June of 1986. Look them up. It was an advertising coup for the California Raisin Advisory Board (I wonder if you even knew there was such a thing!) This claymation, pretend R&B group actually released 4 albums. But, when I see this picture, it’s their signature song and number one hit that comes to my mind, “I Heard It Through The Grapevine.” (Is it playing in your head right now?)

The term originated in the USA and comes from the telegraph system invented in the 19th century by Samuel Morse. The system required thousands of miles of telegraph wire to be installed, held in place several feet above the ground by telegraph poles placed at regular intervals along the telegraph route. People thought the wires and poles looked like the strings used to train vines so the telegraph lines became known as ‘the grapevine’. During the American Civil War rumors were often spread via the telegraph lines. When people were asked whether a particular story was true, they would often reply ‘I heard it through the grapevine’.

We’ve been talking about Organizational Communication, it’s “W’s“, its Direction, and its Purposes. In each case the assumption was probably that we were talking about formal Organizational Communication. The “Grapevine” is the informal communication within an organization. It’s the “water cooler” conversation. It’s what people talk about over lunch and at break. It’s what people have to say when they’re outside of work or on social media.

Grapevine conversations often begin with phrases like, “Have you heard …?” or “Did you know … ?” or “Can you believe … ?” In those forms, they can sound a lot like gossip. Some of that will happen because people will be people and often people have an unhealthy interest in the affairs of other people. People will talk about their boss or about the last company event, or about their fears and uncertainty about job security, unless there’s something positive and exciting to talk about. You see, the organizational grapevine is not only a negative thing. It can also be positive. So, let’s look at some advantages and disadvantages to Grapevine Communication.

Advantages of the Grapevine

Disadvantages of the Grapevine

There is a Grapevine within any organization. A good leader will take care to avoid the disadvantages of it while understanding how to benefit from it’s advantages.

Nature abhors a vacuum. In the same way, organizations abhor silence from their leaders. Understand the “5 W’s,” the “4 Directions,” the “5 Purposes,” make sure your message is true and good, and communicate, communicate, communicate. That will give you the best chance to benefit from the Grapevine.

One Reply to “Grapevine Communication”