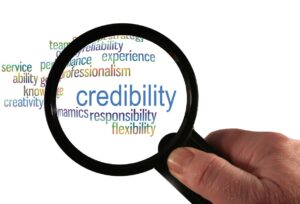 This morning I got up to do my regular weekday morning routine.  I made coffee, took the dog out, read for half an hour, then grabbed my laptop to start writing. I had plugged it in yesterday because the battery was low so I unplugged the charger from the laptop and pushed the button to turn it on … nothing. “What in the world,” I wondered. I looked at the charger and followed the cord to the wall socket. It was not plugged in at the wall.  No wonder. By all appearances my laptop should have been charged up and ready to go. But, the reality was there was no juice going to it to charge it up. There it is. The difference between appearances and reality is what we call credibility. When appearances and reality align there is credibility. When they are different there is a credibility gap. Connecting with people requires credibility. Here are several questions to help measure our credibility.

Have I connected with myself?

Integrity means, in its second definition, the state of being whole and undivided. It comes from the Latin word integer meaning “In tact.” The English word “Integer” means a whole number that is not a fraction. One way I think of integrity is being the same on the outside as you are on the inside. Whether you are or you’re not, people know it.

Have I made right my wrongs?

Imagine yourself talking to a group of people about the importance of collaboration and teamwork. Now imagine seeing, in the group, the face of a person you had wronged in some way and never corrected the wrong. That uncomfortable feeling is the gap between the words you are saying (appearance) and what you had done (reality). That feeling is your credibility gap. Often when we right our wrongs it not only repairs our credibility, it improves our credibility.

This is the outflow of integrity. If I’m the same on the inside as I am on the outside then I will lead like I live. I cannot give to others what I do not have.

Do I tell the truth?

This seems like a no-brainer. How can you have credibility if you lie? Notice, I did not ask, “Do I not lie?” I asked, “Do I tell the truth?” There is an ancient proverb that says, “Wounds from a friend can be trusted, but an enemy multiplies kisses.” I once attended a meeting of division presidents held by the company’s CEO. I was amazed as I watched everyone around the table nod at everything the CEO said like bobble-heads, except one guy. He spoke up and voiced disagreement when he didn’t like what he heard. Later, I wasn’t surprised to learn that guy had become a close adviser to the CEO. Because he had credibility the others lacked. He told the truth.

This is just another way of telling the truth. Parker Palmer, author of The Courage to Teach, says, “We all know that perfection is a mask. So we don’t trust the people behind know-it-all masks. They’re not being honest with us. The people with whom we have deepest connection are those who acknowledge their weaknesses.”

This is not the version that says, “He who has the gold, makes the rules.” This is the true version that says, “Do unto others as you would have them do unto you.” What would happen to families, to communities, to countries, to the world if everyone treated others the way they wanted to be treated? Imagine! The interesting thing about the Golden Rule is that it’s not something you wait for others to do.

Do I deliver Results?

Am I a charger plugged into a device but not plugged into the wall or do I really bring the juice? People usually want to learn from someone who has something to show for their efforts. Here’s another way of looking at it. When we interview someone for a leadership position we ask them questions to determine whether or not they will be a good fit. We are better off asking questions about what they’ve done rather than what they would do. For example, “Could you tell me about a time when you had to deal with an angry customer?” is a better question than, “What would you do if you discovered your customer was angry?” The reason it’s better is that it asks for results the candidate can point to as a way of demonstrating how they might bring the juice in the future.

No one wants to connect with a fake, a blow-hard, a know-it-all, or someone who appears hollow. These are all the opposite of credibility. Connection requires credibility. Credibility means “the quality of being trusted and believed in.” Let’s work toward being credible.

One Reply to “Connecting Requires Credibility”