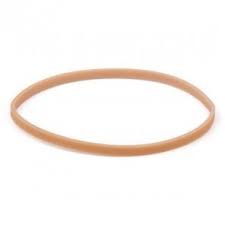 How many uses can you think of for a rubber band? Holding your newspaper together (which is the first common use of rubber bands outside of factories), holding long hair out of your face, shooting your friend from across the room, a reminder around your wrist, a tool for “snapping” yourself when you want to break a bad habit, bundling pencils together, ranchers know how they can be used on their young male livestock, you get the idea. There are almost as many uses for a rubber band as there are rubber bands.

Now, what is one thing every use of a rubber band has in common? The rubber band has to be stretched for it to perform any of it’s useful functions. That’s why John Maxwell calls one of his 15 Invaluable Laws of Growth, “The Law of the Rubber Band.” It says, “Growth Stops When You Lose the Tension Between Where You Are and Where You Could Be.” Not only does growth stop when you lose this tension, but, In the words of Abraham Maslow, “If you plan on being anything less than you are capable of being, then you will probably be unhappy the rest of your life.”

The problem with stretching is that it’s uncomfortable. If fact, if you haven’t stretched in awhile, it can be downright painful whether we’re talking about muscles or personal growth.

Sometimes You Stretch Yourself

One of the first things athletes do before any kind of exercise is stretch. Many companies have their employees stretch before the work day. Of course, they do this to warm up and loosen muscles to prevent injury and allow for strengthening. In personal growth it means we set goals that are just beyond what seems possible. We set “stretch goals.”

We’ve all heard of S.M.A.R.T. goals, right? What does the “A” in smart stand for? Achievable. Does that sound like a stretch goal? Mark Murphy, CEO of Leadership IQ proposes a different kind of goal in a white paper called, “Are SMART Goals Dumb?” He proposes H.A.R.D. goals. In his model the “D” stands for Difficult. It means, “I will have to learn new skills and leave my comfort zone to achieve my goal.” Now we’re talking about stretching. Rabbi Nehman asks, “If you won’t be better tomorrow than today, then what do you need tomorrow for?”

When was the last time you set a goal that required you to learn something new and leave your comfort zone? How else will you become all that you’re capable of being? You don’t want to end up on the wrong end of Maslow’s quote, right?

Sometimes You Get Stretched

Do you remember the toy called “Stretch Armstrong?” He was the super-hero you could stretch to 4 times his size. Mr. Armstrong, however, never stretched himself. He got stretched. Life can be like that. We can get thrust into situations that force us to stretch.

Three days after the Presidential election in 2008, seven people from the company I was working for at the time got laid off. I was one of them. If you remember the economic situation at the time, it was pretty tough. People weren’t hiring. One thing led to another and in a few months my wife, 3 of our children, and I were living in China and I was in a role I never would have imagined. That role led to me being acting director of an international school the next year. I had never lived overseas before. I had never worked in education before. I got stretched.

Albert Einstein said, “The mind that opens to a new idea never returns to its original size.” He’s right. Living in China was not on our radar screen at all prior to us moving there. But, the growth we experienced, personally and professionally, during those two years is something we wouldn’t change for anything.

Becoming all you can be requires growth. Growth requires change. Change is uncomfortable for most people. I recommend being intentional about it. Believe it or not, it’s more comfortable than getting stretched. Start small. Set a goal to try something you’ve never done before by the end of the month. Once you’ve tried it, reflect on the experience. Did you enjoy it? What did you learn? Another quote from John Maxwell is, “Experience isn’t the best teacher, evaluated experience is.” Unless I reflect on and evaluate an experience, I won’t learn from it and grow.

I help leaders leverage 5-Star performance by engaging their people